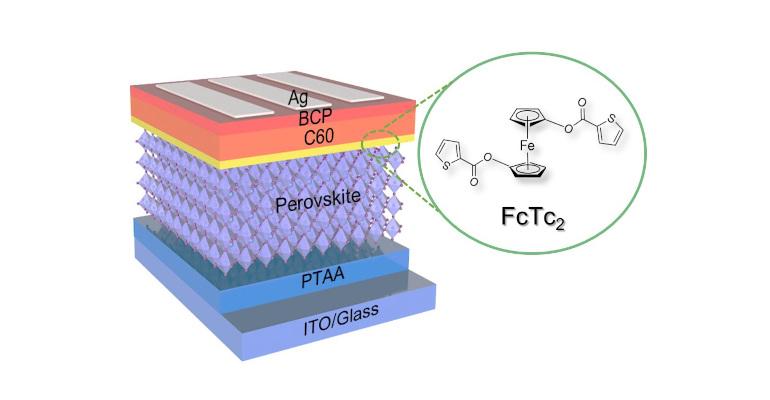 Researchers at Imperial College London have developed new materials that could make the fabrication of solar cell devices cheaper and easier.
The addition of ferrocene to photovoltaic, perovskite-based films improves their competitive position against traditional silicon-based devices.

Scientists at Imperial College London teamed with researchers from City University of Hong Kong (CityU) to explore the use of iron-based ferrocenes in perovskite solar cells to improve their efficiency and stability.

Perovskite-based solar cells long have been seen as a low-cost, high-efficiency and lightweight alternative the silicon-based ones in wide deployment today. Perovskite cells can be printed from inks onto thin films, making them lightweight and flexible.

“Silicon cells are efficient but expensive, and we urgently need new solar energy devices to accelerate the transition to renewable energy,” observed Professor Nicholas Long from the Department of Chemistry at Imperial, in a press statement.

Stable and efficient perovskite cells could ultimately allow solar energy to be used in more applications—such as across the developing world and in next-generation of wearable devices, he said.

However, perovskite-based cells have faced significant challenges, which are why they currently aren’t widely used. So far they have not demonstrated the efficiency and long-term stability of silicon-based cells, which has hindered their adoption and deployment, researchers said.

Researchers hope to change this scenario through the use of ferrocene materials, which they found can help boost both the efficiency and stability of perovskite cells, they said.

Perovskite forms the layer of solar cells that harvest sunlight to turn it into energy. However, the electrons in perovskites are less “mobile” than in silicon—thus they have less capability to move from the harvesting layer of a cell to the part that converts electricity.

Enter ferrocenes, or compounds with iron at their center that are sandwiched between rings of carbon. This unusual structure gives them excellent electron richness—or, in the application for perovskite-based cells, allows electrons to move more easily from the perovskite layer to subsequent layers. This improves the efficiency of converting solar energy to electricity, researchers said.

Indeed, tests performed by the researchers demonstrated that the efficiency of perovskite devices with an added ferrocene layer can reach 25 percent, nearly on-par with silicon cells, researchers said.

The addition of ferrocene materials to the perovskite devices also improved attachment of the perovskite layers to the rest of the device, adding a level of stability and thus helping to solve another issue impeding the widespread use of perovskite-based devices, they added.

The team published a paper on its work in the journal Science.

Researchers have patented their design and hope to license it to bring their perovskite-based cells to the commercial market.  In the meantime, they will continue to experiment with different ferrocene designs to improve the cells’ performance further and achieve even more stable devices, they said.