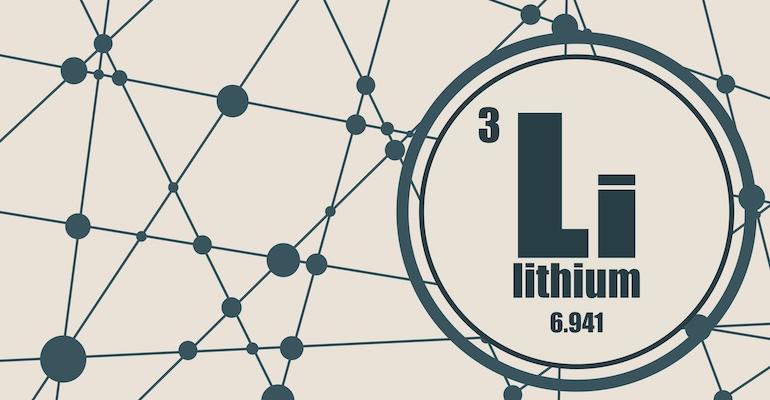 There are two ways to increase the range of electric vehicles (EVs): Either you use a bigger battery pack, which means more cost, weight, and longer charging times, or you increase the energy density of the individual cell within the battery pack. This latter approach is receiving worldwide research attention from universities, national research labs, and corporations.

One of the aspects of present commercial lithium-ion batteries that limit energy density is the use of carbon graphite as the anode (negative electrode). Graphite anodes accept lithium ions between the layers of carbon atoms during charging in a process called intercalation. During discharge, the lithium ions are released and travel through the electrolyte to the cathode (positive electrode). The problem is there are limited numbers of lithium ions that can be stored within the graphite electrode, limiting the power density of the battery cell.

If, however, the graphite is replaced with a foil made from lithium metal, there is a dramatic increase in the number of lithium ions that can take part in the electrochemical reactions. Energy densities 3 to 5 times greater are possible with lithium metal when compared to graphite anodes.

There are several problems that need to be addressed and solved before lithium metal can find large-scale commercialization in battery anodes. When lithium ions arrive at the anode during charging, they plate unevenly onto the lithium metal surface. This can cause the formation of spikey crystals called dendrites that can grow large enough to reach the cathode and short out the battery cell, potentially causing a fire. Work is underway to use new liquid electrolyte formulations to try to reduce dendrite formation or to use solid electrolytes made from ceramic or polymer materials that can suppress the formation of the spikey crystals or lithium on the anode surface.

Dendrite formation isn’t the only issue with using a lithium metal anode. Lithium metal is reactive and each time the battery cell charges it degrades as it reacts with the liquid electrolyte. During early experiments with lithium-metal cells, the lifetime was only around 10 charge and discharge cycles. Current research has that number closer to 400 cycles, but the consensus is that a lifetime of at least 1,000 cycles will be necessary to meet the demands of an EV.

In research performed by scientists from DOE’s Idaho National Laboratory (INL) performed on one of the multilayer lithium metal pouch cells, they found that only about 15 percent of the cell’s capacity was lost over the first 170 cycles, but then 75 percent was lost over the next 25 cycles. This was not expected, and to understand the. cause they extracted one of the cell’s layers and sent it to Brookhaven Lab for studies at the X-ray Powder Diffraction (XPD) beamline of the National Synchrotron Light Source II (NSLS-II).

The primary interest was in the lithium metal anode, but because its x-ray diffraction pattern is weak because lithium has few electrons, it doesn’t change very much during charge and discharge cycling. The team decided to use x-rays to determine changes that might occur in the anode by studying the related changes that occur in the nickel-manganese-cobalt (NMC) cathode, which has a much stronger diffraction pattern. In a Brookhaven press release Peter Khalifah, a joint appointee in the Chemistry Division at the U.S. Department of Energy’s (DOE) Brookhaven National Laboratory and the Department of Chemistry at Stony Brook University explained the reasoning.  “The cathode serves as a “reporter” for the anode,” he said. “If the anode starts to fail, its problems will be mirrored in the cathode because the nearby regions of the cathode will be unable to effectively take up and release lithium ions,” he added.

The team first mapped the state of charge (SOC) which is analogous to a gas tank. A 100 percent SOC means the battery is fully charged, 80 percent SOC indicates the battery is charged at 80 percent of capacity, and so on. The SOC corresponds to the lithium content in the cathode, where lithium ions are inserted during discharging and removed during charging. When lithium ions are removed from the cathode, it shrinks, and this dimensional change can be easily determined from x-ray diffraction measurements. In addition, local regions where performance is degrading will have different SOCs than the rest of the cathode. 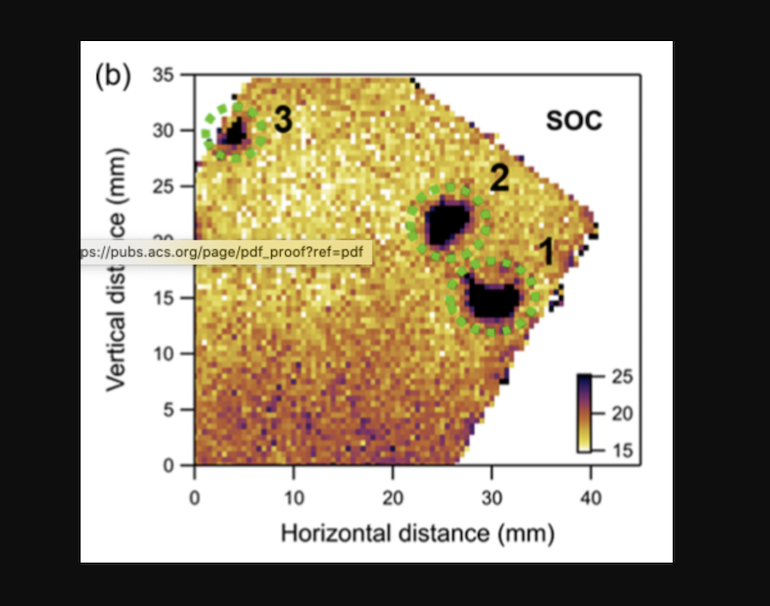 A state-of-charge map for a single cathode layer extracted from an end-of-life pouch cell after its 199th discharge cycle. The map exhibits three hotspots (numbered circles), each with a state of charge much higher than that in the rest of the cell, indicating localized failure in these locations.

The SOC mapping produced with the x-rays showed three “hotspots,” each a few millimeters in diameter, where the team noted that local performance was much worse than the performance of the rest of the cell. The finding suggests the battery capacity loss was due to partial destruction of the liquid electrolyte, caused by unwanted chemical reactions, and that a loss of the electrolyte in these regions will “freeze” the battery at its current SOC.

“Electrolyte depletion was the failure mechanism most consistent with the synchrotron x-ray and electrochemistry data,” said Khalifah. “In many regions of the cell, we saw the electrolyte was partially depleted, so ion transport became more difficult but not impossible. But in the three hotspots, the electrolyte largely ran out, so cycling became impossible.”

It was also noted that “Regions with the worst failure typically had smaller amounts of NMC than the rest of the cell. When less of the NMC cathode is present, that part of the battery charges and discharges more quickly and completely, causing the electrolyte to be consumed more rapidly and accelerating its eventual failure in these regions.” The team noted that even small reductions in the cathode amount of five percent or less could accelerate the failure.

The team knows that further work is needed. “In this study, we looked at a single snapshot of the battery near the end of its lifetime,” said Khalifah. “One important result was demonstrating how the technique has sufficient sensitivity that we should be able to apply it to operating batteries. If we can collect diffraction data while the battery cycles, we’ll get a movie of how all the different parts change over time. This information will provide a more complete picture of how failure happens and, ultimately, enable us to design higher-performance batteries.”

Investigating the Nature of the Solid Electrolyte Interphase
Apr 14, 2021