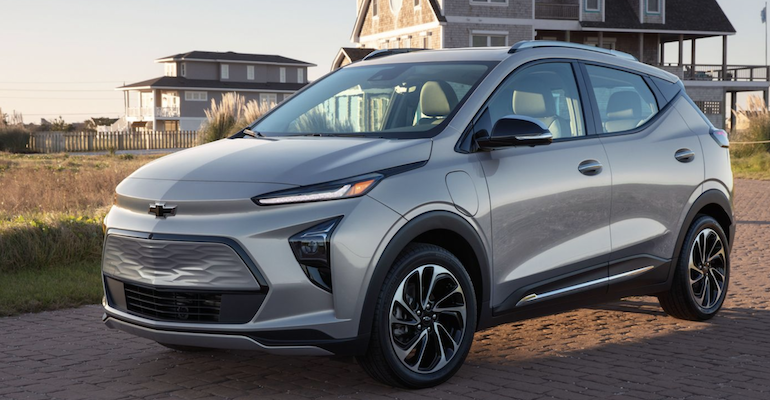 Potential battery fires have moved GM to follow Hyundai’s lead in recalling all of its Bolt vehicles.

Not long ago, we reported on the two different approaches that Hyundai and General Motors (GM) were taking to a problem of rare but significant battery fires in each company’s electric vehicles (EVs). Hyundai had nine instances worldwide where its EV models, powered by lithium-ion batteries made by LG Chem (now called LG Energy Solution) caught fire. The company recalled over 85,000 Hyundai and Kia vehicles to replace the entire battery pack at a cost of nearly $1 billion.

Related: The Top 10 Carmakers and Their EV Offerings – Today and Tomorrow

GM’s problems began in 2020 when 5 Chevrolet Bolt EVs from model years 2017 through 2019 caught fire. According to an April 29th  report in the Detroit News, GM's experts concluded a "rare manufacturing defect in certain battery modules in vehicles from these production years" led to the fires, according to GM spokesman Dan Flores in a statement to the newspaper. The batteries were also made by LG Chem and had a similar configuration to those used by Hyundai. That defect could cause "a heat source or a short in a cell, which could propagate into a fire," Flores added.

To fix the issue, GM created tools for "dealers to diagnose battery issues as well as advanced onboard diagnostic software that, among other things, has the ability to detect potential issues related to changes in battery module performance before they become potential problems during vehicle operation and charging," Flores said. Owners with the affected Bolts were told to visit a Chevrolet EV dealer to have a software remedy installed and will then be able to charge to 100%. A software fix, in other words.

Previously, GM had identified the potential fire hazard only exited in 2017-2019 model year Bolts, but it appears that the problem is much more widespread. Now, the company is issuing a recall of all Bolt EVs (2017-2022) and all Bolt EUVs (2022) to address the risk of battery fires in these vehicles. According to a news release from the company, “As part of GM’s commitment to safety, experts from GM and LG have identified the simultaneous presence of two rare manufacturing defects in the same battery cell as the root cause of battery fires in certain Chevrolet Bolt EVs.”

“Out of an abundance of caution, GM will replace defective lithium-ion battery modules in Chevrolet Bolt EVs and EUVs with new lithium ion modules. We will notify customers when replacement parts are ready. We are asking customers to take the following steps until the new remedy has been performed:”

1. Set your vehicle to a 90 percent state of charge limitation using Hilltop Reserve mode (for 2017-2018 model years) or Target Charge Level (for 2019-2022 model year) mode. Instructions on how to do this are available in the video below. If you are unable to successfully make these changes, or do not feel comfortable making these changes, GM is asking you to visit your dealer to have these adjustments completed.

2. Charge your vehicle more frequently and avoid depleting your battery below approximately 70 miles (113 kilometers) of remaining range, where possible.

If you own a Chevrolet Bolt and need more information, contact GM’s customer support team, Chevrolet EV Concierge 1-833-EVCHEVY available Monday through Friday from 8:00 am – 12:00 am ET; Saturday and Sunday from 12:00 pm – 9:00 pm ET.

In our previous report, we said that it was “impossible to know which of these two solutions—the drastic and expensive measures by Hyundai, or the less expensive software upgrade by GM—will provide the best result for each company’s EV customers.” We also said, “Perhaps time will tell.” It appears that it has.

13 Concerns That Need to be Met in order to Ensure Lithium-Ion Battery Safety
Jul 16, 2021